Do you ever wonder how dogs find criminals in a passenger ship? It’s simple: by sniffing. They are called detection or sniffer dogs. Trained to detect people and substances, through their senses, such as explosives, illegal drugs and blood; almost always the sense of smell, which is two thousand times much stronger, and fifty times more sensitive than that of a human’s. In addition to sensitivity, a dog’s sense of smell is pricky.

It can discern a specific scent; meaning it can recognize cheese in a fish and vegetable market thousand miles away from where it is standing. Hunting dogs that search for game and search dog that search for missing humans are generally not considered dogs. However, there is some confusion with cadaver dogs, only trained to detect human remains.

As to not make a fuss, they are taught to learn two kinds of alerting: the passive and the aggressive. Drug dogs use an aggressive alert, where they dig and paw at the spot where the smell the dugs. On the other hand, there are some cases where this kind of alert would be bad news. Placed in a situation where bombs are included, scratching can be very disastrous. In these cases, a passive alert is used. 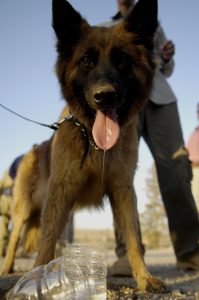 A good example for this type are the beagles used by the Department of Agriculture where the dogs are trained to sniff out produces that are not allowed to enter the country. The Beagle Brigade, as how they are called, sniffs people’s luggage while they wait in lines at airports and border crossings. In other countries, some also are used in emergency search actions. Because no one wants a dog digging in their belongings, the USDA beagles have been trained to simply sit down when they are able to smell it.

Trainers have come up with a strategy for dogs employed to sniff out drugs. On odd cases, they seem to eat them when they have found the illegal substance. Is it because they are addicted to those drugs themselves? In fact, the dogs have absolutely no interest in drugs. What they are actually looking for is their favorite toy. In an article found in discovery.com, the “toys” that are mostly often used are white towels. Since dogs love to play this vigorous game of tug-of-war, they have generated the “White Towel Game” idea.

To begin the training, the handler simply plays with the dog using a towel, which has been washed carefully to appear null and without scent for the trainee. Later, a bag of marijuana, for instance, is rolled up inside the towel.

After playing for a while, the dogs starts to recognize the smell of the drug as the smell of his favorite toy. The handler then hides the towel, with the drug, in various places. Whenever the dog sniffs out the drugs, he digs and scratches, trying to get his toy. He soon comes to learn that if he sniffs out the smell of drugs, as soon as he finds them, he’ll be rewarded with a game of tug-of-war.

Dog-Care.Net is a participant in the Amazon Services LLC Associates Program, an affiliate advertising program designed to provide a means for sites to earn advertising fees by advertising and linking to Amazon.com.